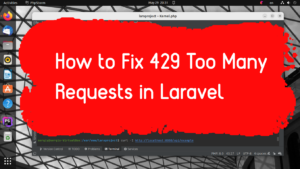 If you create an API on Laravel, you can see an exception with the message “429 Too Many Requests”. It is quite frequent when you send many requests to a server. For example, it can appear when you update the status very frequently. Perhaps, you should think about using sockets, etc in cases like this.

But in this article we will explain how to fix 429 Too Many Requests in Laravel and allow Laravel to accept as many requests as you need.

429 Too Many Requests Exception in Laravel

By default, Laravel has a throttle mechanism for all routes registered for API route middleware. You can perform only 60 requests per minute. If you open an app/Http/Kernel.php file and find a $middlewareGroups variable, you will see throttle:api middleware:

But these changes will be applied to a whole project. In many cases this is not a good idea. Perhaps, you should change the rate limit only for one API route, and leave default values for others. You can do this using the withoutMiddleware() method.

Call withoutMiddleware() when you are registering a needed route. Set “throttle” middleware name as the first parameter. For example:

If you cannot add this middleware, then the route has no limit for requests.

You can debug rate limiting using curl or another client. Just look at the headers X-RateLimit-Limit, X-RateLimit-Remaining: For example, the request with the throttle enabled:

Here the number of total available requests is 60, and you can use almost 58 during the current minute. Here is an example without the middleware. As you can see, there is no rate limiting headers:

In this article, we have explained how to disable rate limiting in Laravel for one specific route or the whole project. However, if you are getting issues with a high number of requests to one route, consider using other technologies, for example sockets. It can reduce server load and make clients get information about changes faster. You can read how to create REST API in more detail in this article.

How to Fix 404 Not Found in Laravel

Jobs and Queues in Laravel

How to Create REST API in Laravel

How to Use ChartJS with Laravel

How to Create Unique Slug in Laravel

Thank you for subscribing.

we respect your privacy and take protecting it seriously

Manage Cookie Consent
To provide the best experiences, we use technologies like cookies to store and/or access device information. Consenting to these technologies will allow us to process data such as browsing behavior or unique IDs on this site. Not consenting or withdrawing consent, may adversely affect certain features and functions.
Manage options Manage services Manage vendors Read more about these purposes
View preferences
{title} {title} {title}
Go to mobile version